A text by S.M. Pearson

In Richard Savoie’s pictorial world, the theme, even in the middle of the night, seems to explode with light all the way forward while the characters who inhabit his paintings turn their backs on the narrator, seeming to leave him as an observer capturing a fleeting moment.

It seems that the artist has a visual memory that allows him to sketch a slice of life, a fleeting moment; a feeling. For most of us, this wouldn’t last long enough to be expressed in words, let alone in pictures. On the other hand, Savoie manages to place us in a world, in a moment, and manages to place on the surface of the painting what he himself has felt.

Born in 1959 in Moncton, Richard Savoie is a man and an artist who loves living on the edge of the precipice. The man likes to push the limits of his physical endurance and test the boundaries of his thinking. An avid cyclist, he lives on two wheels during the beautiful summer days and uses the liberating energy he derives from this activity to inject an ever-renewed vitality into his art.

And Savoie the artist takes chances …

For more than twenty years, his pastellist’s work has made him one of the most respected and renowned figurative artists in Canada. Other artists would have taken advantage of this notoriety and sat comfortably on an uneventful career and reaped the rewards. Not our man …

A few years ago, Savoie decided to take a huge risk and put aside his pastels, his paper and the comfort of a technique acquired and honed over the years. He traded the assured success for the happiness of recharging his batteries as an artist and began oil painting.

Any artist who has made the leap from one medium to another is familiar with the pressures and work involved in such a change. Now imagine the stress that such a decision places on an established artist.

And yet … As soon as this pictorial exodus has started, Savoie demonstrated an affinity for this new medium that no one could have anticipated.

The lucky ones who first glanced at the artist’s new work were dumbfounded. As Savoie was an accomplished pastellist, his work as a painter pushed the limits of his talent so far that it appeared to everyone that a new artist has been born!

Indeed, the new works of Savoie explode! Light, composition, themes, everything vibrates and lives with an energy that is as unexpected as it is welcome. He instinctively understands the properties of his new medium and exploits all its facets. Shine, texture, depth and richness, he takes his decades of pastellist experience and uses his new trademark to root out emotions that no one would have thought possible.

His snow is whiter, brighter, his stones are harder, truer, his skies are alive! And both his streets and his forests are the very life of the paintings which he executes with obvious pleasure and happiness and which help him keep the vital energy essential to great artists.

Where will the work of this exceptional painter go in five, ten years? Who would even dare to speculate on this? Who could have predicted just five years ago that he would become one of the masters of oil painting of our time?

Let us take the example of Richard himself and let time and life reveal to us the surprises that this exceptional artist has in store for us. 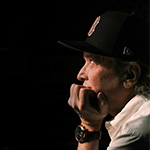